Vacuum HQ ⇢ Samsung Bespoke Jet Review - Can you have both Style and Performance?

Samsung Bespoke Jet Review - Can you have both Style and Performance?

Samsung aims to keep their flagship cordless stick vacuum anywhere but in a closet. 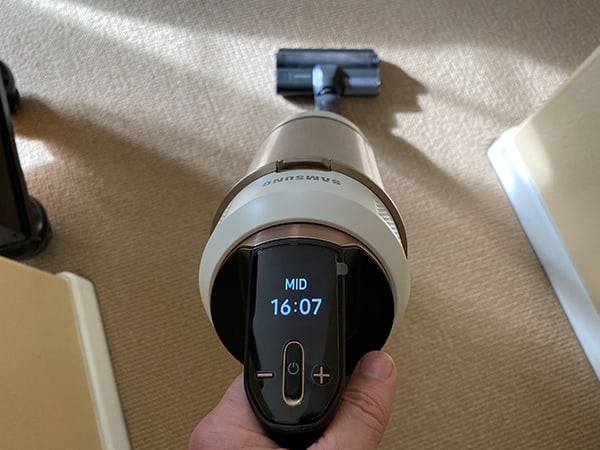 While the Samsung Bespoke Jet carries a high price tag, it delivers on its promise of being convenient, powerful and designed to be seen.

If you are in the market for a premium cordless stick vacuum the Bespoke Jet is difficult to beat.

At the top of Samsung's cordless vacuum line is the Bespoke Jet. While having a lot in common with Samsung's broader Jet stick line, the Bespoke model is easily the best Samsung Jet cordless yet.

There’s a lot of vacuum to talk about here. Actually, there’s really two — the Bespoke Jet cordless vacuum and then the vacuum that empties the vacuum, the Clean Station.

After spending a good deal of time with the Bespoke Jet, we’re comfortable saying this is among, if not the best cordless vacuums you can buy. But, it’s not for the price-conscious, nor is it necessary for every buyer.

Samsung provided us a Bespoke Jet to review. While we appreciate their generosity, when a manufacturer offers us a product to review it does not influence the content we publish.

With the Bespoke Jet cordless vacuum Samsung has taken the two things that were so impressive about the Clean Station inclusive Jet 75 and 90 models — an all around excellent, powerful stick vacuum and the convenience of self-emptying — and turned it up a notch.

The Bespoke model has more power, a tightly integrated Clean Station, a powered upholstery brush, every accessory you might need, and a thoughtful accessory caddy to hold all its extras. Oh, and the accessory caddy also keeps the included second battery charged up, too.

It all sounds great. And, after unboxing and setting ours up it definitely looks great in our opinion, too. But, there’s more to a good product than looks.

When we bought our first Samsung cordless vacuum, we were impressed. Since then, the Jet Cordless family has become somewhat crowded with what we feel may be too many models.

So, with the Bespoke Jet we really wondered if it was necessary. But, after using the Bespoke Jet for awhile and getting to know it, we think it is clearly more than just a cosmetic upgrade from the Samsung Jet 90 with a hint more of suction. And, for the design-conscious buyer, its clearly a better choice, too.

Where the vacuum itself is concerned, Samsung states the digital motor in the Bespoke Jet is Samsung’s new HexaJet Motor, and that it provides their “strongest suction.” It does have the same 9 cyclone, 27 air intel configuration at the earlier models, however.

Although the Bespoke Jet is capable of higher suction than Samsung’s previous flagship, it still maintains the maximum 60-minute run time on a single battery.

And, since it ships with two batteries, the total theoretical cleaning time is two hours.

On the handle is an LCD display, familiar to those who have used the 70, 75 or 90 model, although those previous models have an LED screen. It’s not as high-tech as the one on some newer Dyson models, but its simplicity seems to be by design. It is one of those things that is integrated with the product’s experience. The product feels like the intent was simplicity across the board.

The Bespoke Jet is a lighter than the earlier 200 airwatt models too, weighing in at 5.7 pounds vs. their 6.2 pounds. While minimal, the weight savings are appreciated when the vacuum is used as a handheld.

The Bespoke Jet ships with a new full-size brush called the Jet Dual Brush, too. The new brush includes a rolling, but non-powered, front brush that moves when the vacuum is pushed or pulled. It is a fairly simple upgrade from the Turbo Brush but it makes a difference.

Vacuuming on hard floors and carpet

We like the feel of the Bespoke Jet a lot on all the surfaces we have bene using it on – hardwood floors, area rugs, a mixed pile carpeting. Like most cordless vacuums, it is definitely at its best on hard floors.

On carpet the lower the pile the better the steering works. Most cordless vacuums have the same characteristic although models which are heavier at the head do have an advantage here.

But, as far as actually picking up dirt and debris, it’s on par with the best cordless vacuums available.

Scores on carpeting followed closely behind and all three bettered tests of earlier models. This surprised us as we thought the carpet-only cleaning brush that shipped with earlier Jet Stick models would have outperformed it.

We mentioned earlier that the single full-size brush shipping with the Bespoke Jet has something new for Samsung, a smaller rolling (not spinning) brush at the front of the cleaning head.

While not powered, this brush allows the Bespoke model to maximize suction and the ability to pick up debris on both hard flooring and carpeting. Shark has been using dual-brushes for years on both cordless and upright vacuums, but theirs are powered. Surprisingly, Samsung’s non-powered one does provide quite a bit of benefit.

Two things that are absent are some kind of anti-hair wrap technology and headlights, both of which we wish were included.

The Bespoke model has the most suction available from Samsung at 210 airwatts. The difference between it and the two next most powerful Samsung models is only 10 airwatts (5%). The delta is much greater when compared with the Jet 60 (see our Samsung Jet 60 review), the entry level Jet cordless vacuum.

Although the Bespoke Jet is capable of higher suction than Samsung’s previous flagship, it still maintains the maximum 60-minute run time on a single battery.

And, since it ships with two batteries, the total theoretical cleaning time is two hours. But, in reality, most won’t see that. We used the vacuum predominantly on its Medium suction setting, occasionally switched up to Max and rarely needing the Jet setting.

Cleaning a 2500 square foot home with a mix of hard floors and carpet has not been an issue. And, most of the time we can get through a full cleaning without needing a battery change at all.

All in One Clean Station

Because it is used so frequently, the All in One Clean Station gave us an immediate reaction. It sounds simple, but not having to remove and replace the dustbin to empty it is signifiant. After returning the vacuum to recharge, you simply push the Empty button and you’re done.

While the original Clean Station works well, the Bespoke version is how it feels like it was always intended to work.

Design is the most obvious aspect of how the Bespoke Jet differs from both its peers and competitors. And more than simply design, Samsung’s approach is a new take on the cordless vacuum’s place in the home. The Bespoke Jet is meant to be seen, displayed even, as opposed to hidden away in a closet or shunned in a corner.

The design is very clean, integrating its Clean Station and charging capability into a single integrated stand. Unlike the separate, standalone, boxy Clean Station that is offered with earlier models like our favorite, the Jet 75 we bought, reviewed, and use daily (read our Samsung Jet 75 review), the Bespoke’s face is a simple clean cylinder which makes up the majority of the base.

When the vacuum is placed on the All in One Clean Station most the vacuum’s body is covered by that now taller Clean Station. Samsung released the Bespoke Jet in in three colors: Misty White, Midnight Blue and Woody Green, breaking the mostly grayscale used on the numbered Jets. The one we are reviewing is Misty White, with the majority of the All in One Clean Station and tasteful accents on the Bespoke Jet itself having a soft white matte finish.

We think it is far more attractive than any of the earlier bin-emptying Samsung Jet cordless options. One thing is for certain, we are expecting to see more cordless vacuums with a similar approach to bin emptying. What isn’t certain is if we’ll see a design as cohesive and smart looking as the Bespoke Jet any time soon.

Samsung has put a lot of thought into how this vacuum will be used; even where it will be placed and seen.

Ergonomically, the Bespoke Jet vacuum itself is a continuation of a well sorted product line. But, ease of use goes far beyond this. The Bespoke Jet’s strong points in this regard are:

Another area worth mentioning is how good the Bespoke Jet does getting beneath furniture. Since the vacuum can lay down fairly flat, it can get beneath furniture that is very low. This does require taking a lower posture, of course.

While vacuuming with the Jet Dual Brush we measured how much noise was generated in each of the four power modes. The sound readings we took were at an approximate distance of 2 feet. Across the board, we found the Bespoke Jet to be in range with premium cordless vacuums and only a few decibels louder than high suction non-Bespoke Samsung models.

As far as value is concerned, the Bespoke Jet is obviously one of the higher priced cordless vacuums on the market today. It’s not for every home, not was it designed to be.

In all fairness, there are other cordless vacuums around or above this price point which don’t have all of what the Bespoke Jet offers. So, while it is expensive, when compared with its close competitors, it does provide significant value.

First, let's acknmowledge the target buyer for this vacuum? The Bespoke Jet is designed for the premium buyer looking for the ultimate not only in cleaning performance and ease of use but also in design.

The first full sentence on Samsung’s page for the Bespoke Jet focuses on its design, reading “Contemporary colors and premium finishes to fit your décor and lifestyle.” To be clear though, it’s not just design. The vacuum performs better than its predecessors, too.

The complete package — vacuum, accessories, batteries, cleaning ability and the All in One Clean Station make for both a great cleaning package that is designed to both be used and admired.

We recommend the Samsung Bespoke Jet for those who are in the market for a premium cordless vacuum that are prepared to pay the premium price it comes with.