Our take on the entry-level Jet 60 cordless stick vacuum for homes with pets after using every stick vacuum Samsung makes. 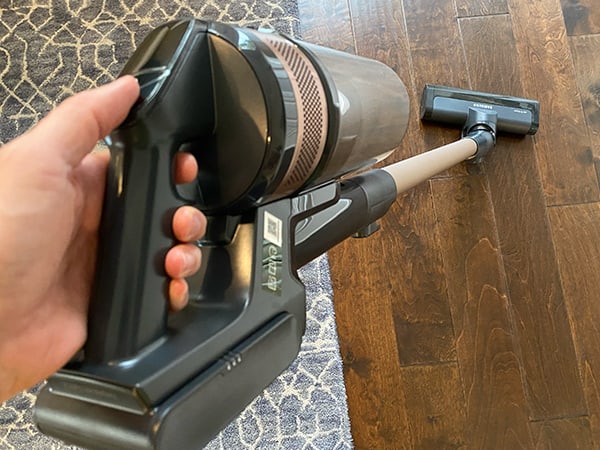 Samsung’s Jet 60 cordless is a great vacuum — when paired with the right home.

Read all our findings below and see if the Jet 60 is right for you.

The Jet 60 has a lot in common with Samsung’s broader line of cordless vacuum options. We cover the pros and cons of this entry-level stick vacuum.

We purchased, tested and reviewed our first Samsung Jet vacuum over a year ago and loved it. Since then we have tried every Samsung Jet with the exception of the Jet 60 model. So, when Samsung offered us a Jet 60 Pet cordless to compare with its siblings we couldn’t wait.

The Jet 60 isn’t for the same consumer as the other Samsung Jet vacuums. Sitting between the Jet 60 and 75, the Jet 70 seems that it may be sunsetted altogether, so we won’t go into much detail on that option.

At the top of the line sit the Samsung Jet 90, which shares its motor and suction with the Jet 75, and the Bespoke Jet. Both are far more powerful and have larger which batteries yield longer run times. From our seat, those premium sticks are competing for whole home and upright replacement duty, battling the likes of the Dyson V15 Detect.

We find the Jet 60 to be geared toward those with apartments, condos and smaller homes. It would also make sense for use in a portion of a larger home, especially areas or floors with mainly hard flooring surfaces.

When our Jet 60 arrived we quickly got it unboxed and looked everything over. We didn’t check Samsung’s site before it arrived and were surprised that it came with the Mini Motorized Tool. But, it makes sense since ours is the Pet model and getting hair off furniture and other upholstery is something that it should be able to handle.

The other attachments it came with were the Combination Tool and Long-Reach Crevice Tool. As far as the full-size cleaning head, this was our first use of the Jet Fit brush. The newer brush serves as a single all-surface full-size head.

There’s more than one Samsung Jet 60 cordless vacuum. The one we are reviewing here is the Jet 60 Pet. Other variations model include the Jet 60 Fit and Jet 60 Flex. The Fit model also appears to sometimes be sold simply as the Jet 60.

The core of the vacuum — the motor, filtration system, power and dust bin are the same. What’s different is the attachments that each model ship with. At the time of review, the 60 Pet offered on Samsung’s site has a single battery and the attachments we listed in the introduction. It is also silver in color. The Jet 60 Flex has everything the Pet model has but lacks the Mini Motorized Tool.

We recommend the Jet 60 for apartments, condos, smaller homes and rooms with mainly hard flooring and low pile carpet or rugs.

If you do compare prices or make a purchase be sure to see specifically what will ship with the Jet 60 model you choose. Actually, we recommend this with any Samsung cordless you choose as they now sell more than one variation of other vacuum models, too.

The Jet 60 operates the same, as more expesnive Jet cordless vacuums with the plus button increasing suction and the minus button reducing it. But, there's one big difference. The Jet 60 doesn't have the digital display found on the more expensive Jet models.

We have been using a Bespoke Jet and Jet 75 pretty frequently as of late. So, while we had a reference point it was fairly distant as the Jet 60 has 150 airwatts whereas the aforementioned Jet cordless models have 210 and 200 airwatts respectively.

In real-world use, we used the Medium suction mode the most and while it didn’t seem dramatically lower than the other Samsung stick vacuums we’ve been using, there was a noticeable difference audibly, lacking the higher whine of the more powerful Samsung cordless vacuums.

Suction is one thing, but actually using the vacuum is a different thing altogether. What we found was that on hard flooring we didn’t seem much of a difference. The Jet 60 did very well in that Medium suction mode.

When using it as a handheld, we were also happy with the suction on the Medium setting. Keeping all of this in perspective, the Jet 60 isn’t meant to compete with the models with higher suction. It is meant for apartments and smaller homes or to be used on one floor of a home as opposed to being seen as a whole-home replacement for a larger home.

So, as far as being fit for use, we’d say it on hard floors it did just fine. Where carpeting was concerned there were more mixed results. On lower pile carpet it did great across the board. But, as the pile of carpet increased to high pile carpet, the Jet 60’s scores suffered.

Beyond capturing less dirt and debris on high pile carpet the Jet Fit brush also tended to resist turning, too. We somewhat expected this behavior as we experienced it in limited doses on Jet models with higher suction and even with carpet-specific brushes attached.

Tip: The Mini Motorized tool only ships with the Jet 60 Pet model. The accessory can be purchased separately from Samsung, however.

We thought it was the same one we had seen shipping with the other Jet cordless vacuums we’ve tested. And, we were right. It works well with the Jet 60.

When compared with more powerful Samsung sticks in handheld mode, the package is a bit lighter courtesy of the Jet 60’s lighter weight. On the downside, but as expected, there’s less suction power available. All things considered, we found it to be effective for the 60’s target market.

Like all the Samsung Jet stick models we have tried, the Jet 60 is easy to use. When used as a full-size cordless vacuum it maneuvers easily and intuitively. The main cleaning head is more compact than other models making it easy to get between the legs of stools and into other small places.

As a portable vacuum in handheld mode it is lightweight and works great with all of the included attachments. For vacuuming stairs, we connected the full-size Jet Fit brush without the extension tube (straight to the vacuum) and it worked great.

One thing we still aren’t sold on is emptying the bin on the Jet 60. Maybe it is a bit picky, but for Samsung cordless vacuums that don’t work with the Clean Station we would prefer to not have to remove the dirt bin to empty the vacuum.

The biggest difference between this Jet vacuum and the others in Samsung’s lineup is how much suction it has. For comparison, the Jet 60’s suction power in airwatts is compared with several peer vacuums and with the rest of the Jet line.

The comparison puts things into perspective. It is worth mentioning that price isn't simply a product of how much suction power a cordless vacuum has. Some both pricier and less expensive models ship with a wider sets of accessories, for example.

We measured how much noise the Jet 60 generated in decibels from approximately 2 feet away from the main vacuum unit (where the motor and dust bin are located). Noise was on par with peer vacuums at similar price points.

From the lowest power setting to the highest, the amount of noise measured was 66 dBA, 68 dBA and 77 dBA.

Samsung’s Jet 60 is a great vacuum for the right household. It’s MSRP price is around $399, but it seems to always be on sale around the holidays. We have recently seen Jet 60 models selling for under $200, far undercutting less capable peer cordless models.

But, this isn’t the right vacuum for everyone. We recommend the Jet 60 for apartments, condos, smaller homes and rooms with mainly hard flooring and low pile carpet or rugs.

For homes with medium or higher pile carpet we recommend considering one of Samsung’s more powerful jet vacuums, such as the Jet 75 (a favorite balance of cost and performance) or the Samsung Bespoke Jet for those looking for a premium stick vacuum.

In closing, we wanted to again reiterate that Samsung provided us a Jet 60 Pet vacuum to test. We have purchased other Jet stick models and our opinions are our own and not influenced by Samsung’s generosity.