Samsung Jet 75 Review – With and Without Clean Station 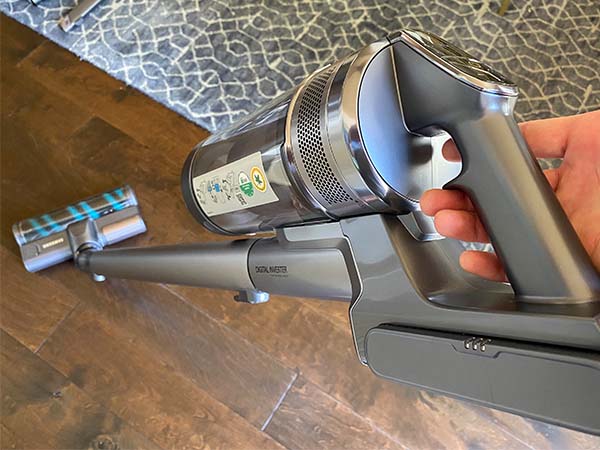 Samsung's Jet 75 cordless stick vacuum finds the balance between features, suction, battery life and value. The Jet 75 is a more-than compelling alternative to pricier Dyson models – and it outperforms many of them, too.

Samsung's Jet 75 is an impressive stick vacuum. In our review we found it to be well designed with plenty of suction power and up-to 60 minutes of run time before needing to be charged. The cordless stick vacuum has the right accessories, a strong digital motor, HEPA filtration, great cleaning performance and a compelling price. Learn more about the vacuum and how it fared in our testing below.

First, let's talk about what we liked about the vacuum and what we thought could be improved.

* This isn't an issue when using Samsung's Clean Station emptying base which we recommend.

We have been using the Samsung Jet 75 daily since we purchased it. When unpacking the box and setting it up, we were immediately impressed with the quality of construction and premium feel.

Once we had full charged the removable battery, we were ready to see how it performed.

Our first cleaning runs were on hardwood floors, and the Jet 75 did a great job. As we continued and vacuumed on various pile carpet with the Turbo Action Brush, we found it also excelled on carpet. This is due to well designed cleaning brushes paired with a high-performing 200 air watt digital motor.

The stick vacuum has three power modes: Min (often called Eco), Mid (normal) and Max. Switching between power modes is the simple push of a button on the vacuum's handle.

We loved that you don't have to hold down a trigger for the vacuum to run. And, the screen on the handle clearly shows which suction mode you are in (among other things). While we welcomed Samsung's simplicity, we would loved an indicator showing how much battery life remained. 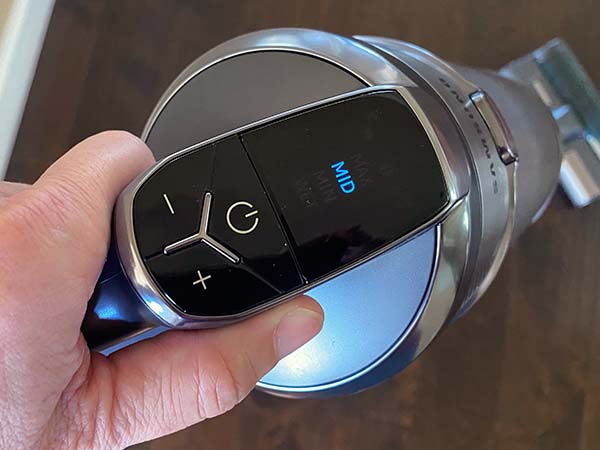 Of course, the higher the setting, the lower the run time before needing to recharge.

We were pleasantly surprised to see that the vacuum did a good job on the Min setting. Performance was excellent on the medium suction setting – enough to handle tough dirt and debris. On hard surfaces the Max mode isn't really necessary.

On carpeting the Jet 75 did a great job, too. Regardless of pile, we found using the vacuum on it's medium suction setting was our default. It easily picked up both small and large debris. The high setting did great for removing more stubborn dirt and sand.

Related: Read our Samsung Jet 90 review to see how it differs from the Jet 75.

We'll touch on this throughout the review, but if you haven't noticed yet, we're big fans of Samsung's Jet line. The Jet 75 is a very well thought out and engineered vacuum, clearly taking aim at the best cordless vacuums on the market today.

The Jet 75 stick vacuum has 5 levels of filtration. This allows it to capture pet dander, pollen and other allergens, trapping up-to 99.999% of micro dust according to Samsung. This is especially nice for allergy sufferers or those with respiratory concerns.

The Jet 75 did not disappoint in our tests. The stick vacuum scored excellent on both hard flooring and on carpeting. It even did well on our tough high-pile carpet test in which sand and fine debris is rubbed into the carpet.

Like many of its peers, the vacuum did tend to get hair longer than 8" stuck on its brushroll. While this is a negative, it's not an uncommon one. Thankfully the brushroll on the Turbo Action Brush, Soft Brush and Mini-motorized Tool are easily removed for cleaning.

The Jet 75 weights in at just over 6 pounds. Both swiveling heads work well, and the vacuum doesn't feel heavy or hard to turn.

Handheld mode is great, too. People sometimes don't realize that you can attach the larger cleaning heads – the Turbo Action Brush and Soft Brush – directly to the vacuum without the tube. We tried this for cleaning stairs and found it to be comfortable and easy.

Getting under coffee tables and other low furniture (where there's enough clearance) was easy enough. The weight of the vacuum does't make it a chore.

If there is any complaint about the large brushes, we'd have loved if Samsung included LED lighting. Unfortunately, none of the vacuums in the Jet line currently include it.

Samsung rates the power of the Jet 75 at an impressive 200 AW (air watts) on its highest setting. That's higher than Dyson's V11 (185 AW) and within striking distance of the V15 Detect – a vacuum costing twice as much. In real-world use, we found suction to be more than adequate.

Our usable suction test on that setting yielded a score that put it among the best-of-the best. We'll have a comparison of test scores coming soon.

Two feet from the vacuum noise was measured at 64dBA, 68dBA and 71dBA in Min, Med and Max modes respectively. Noise is rated at slightly less than other cordless stick vacuums with similar air watt ratings.

Below is everything that comes with the Jet 75 when you purchase it with the optional Clean Station emptying base. If you purchase the vacuum on its own, the three items at the left of the photo aren't included. 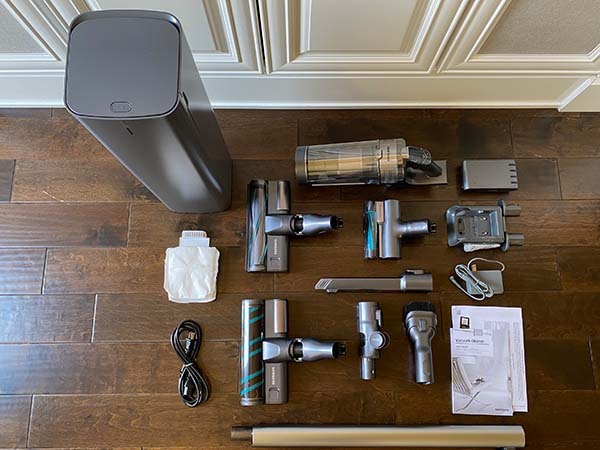 Jet 75 Complete with Clean Station (or without)

When we purchased our Jet 75 Complete, we opted to get it with the optional Clean Station base. And, we're really glad we did. Emptying the Jet 75 is a bit cumbersome when you purchase the vacuum alone.

It isn't difficult, it's just different. While most stick vacuums have a trap door that pops open to empty the dust bin, the Jet 75 does not. To empty the Jet 75, first you remove the dirt bin from the vacuum. Then, you push and twist to remove separate the bin itself.

It isn't difficult, it's just different. And, to be fair, more steps then when emptying a trapdoor style bin.

Samsung's optional Clean Station removes the extra steps and empties the vacuum without getting find dust in your home. Think of the Clean Station is a vacuum in and of itself with the sole purpose of emptying the Jet 75's dustbin. To use it, you remove the dustbin and place it atop the Clean Station. When you do, the Clean Station pops open the dirt bin and sucks all the debris from it.

We love Clean Station and do recommend you consider it. You can usually get the Jet 75 with the Clean Station for less than similarly performing Dyson vacuums.

Whether purchasing the Clean Station or not, all Jet stick vacuums are easy to clean. Both the dustbin and filter can be quickly removed and cleaned with water. 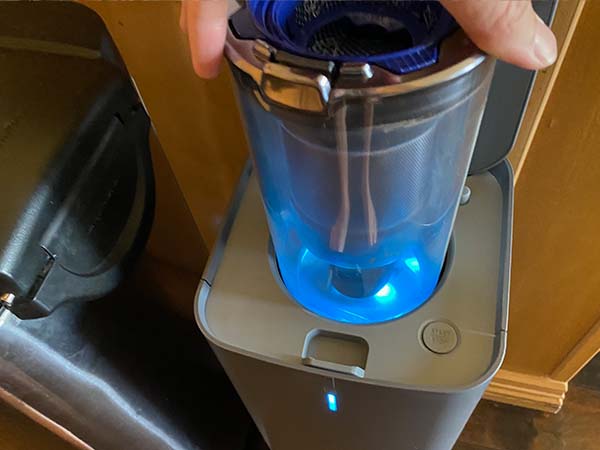 Value for the money

The Jet 75's impressive cleaning abilities, accessories and attachments, battery life and importantly, price, make it an excellent value if you're in the market for a premium stick vacuum. It's price is well below other vacuums which can't match it's performance, too.

One of the Jet 75's toughest rivals is its sibling, the Jet 90. We've thought a lot about the two, and personally find the Jet 75 more compelling.

Samsung's Jet 90 is the same vacuum as the Jet 75. It has the same digital motor and base unit. Both vacuums also ship with a single battery. And, their performance numbers are identical.

The difference is that the 90 has more attachments, a telescoping tube and a standalone charging base. We don't personally see the need to pay the price premium for those options.

In fact, we think the Jet 75 is a much better value.

We wholeheartedly recommend Samsung's Jet 75. Samsung has found a great balance of cleaning performance and price with their Jet stick line.

If it fits within your budget, we also recommend you consider purchasing the Jet 75 bundle that includes the Clean Station.