The best RoboVac from Eufy to date takes a different approach to increased vacuuming power – see how it fared in the real world. 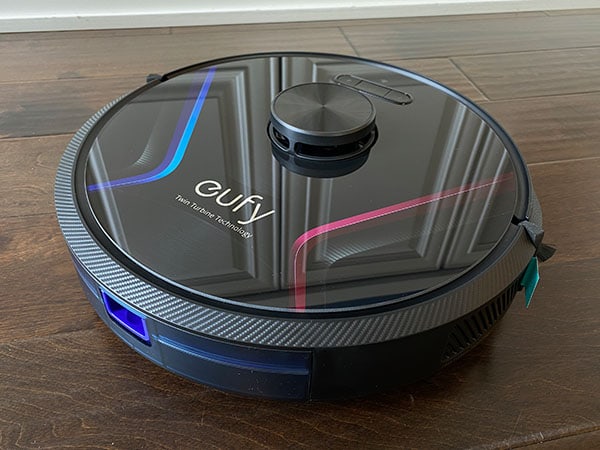 The Eufy RoboVac X8 is one of the best robot vacuums we have tested. Eufy’s LiDAR navigation and mapping, app and vacuuming performance all add up to an excellent robot vacuum.

We recommend the Eufy RoboVac X8.

After using the Eufy RoboVac X8 for nearly a year we continue to be impressed. It has held up very well over time and has proven to be one of the best robot vacuums we have tested.

Let’s get everything on the table before moving forward for those in a hurry. As with any product, robot vacuum or otherwise, there’s the good and the bad. Here’s what our testers had to say after long-term use of the Eufy X8.

Among the Eufy RoboVac robot vacuums and mops there are 4 product lines and over a dozen robot vacuums. From less-to-more advanced, the model lines are: Bounce Series, G, L and X.

When Eufy asked us if we’d like to test a RoboVac our answer was of course, yes. The next question was which one was the most interesting choice. We went with the Eufy RoboVac X8 as it was Eufy's top of the line RoboVac at the time. And, we chose the vacuum-only robot as we were planning on testing several others. What stood out about the X8?

Contrasting earlier Eufy RoboVac models, the X8 is the first Eufy robot vacuum with LiDAR based mapping and navigation. And, we were also curious if the Twin Turbine technology, fancy wording for having two vacuuming motors, and UltraPack Dust Compression were marketing hype or truly beneficial. Here’s what we found.

When our RoboVac X8 arrived, we immediately unboxed it and gave it a look to gauge overall quality. And, as we unpacked the Eufy X8, charging dock and spares, nothing felt cheap or flimsy.

The robot vacuum itself is a common round shaped robot with a glossy top and tasteful graphics. We initially thought that the glossy top would quickly become marred with scratches, but that hasn’t been the case. As far as build quality, the RoboVac X8 and accessories all felt well made and appropriate for its price point.

One design element on the RoboVac X8 that we found to be both aesthetically pleasing and functional is the lip right around the top of the robot. It’s easy to see in the photo below. We’ll cover how it is as much function as form later.

Overall, we really like Eufy’s tasteful use of of textures, those subtle angles and varying finishes. The end product is a premium looking robot vacuum, appropriate for its price point.

Setup with the Eufy Clean App

The RoboVac X8 arrived with its battery partially charged. After topping it up to a full charge we walked the the all too familiar App-based setup. The Eufy Clean, was excellent for connecting the robot to our home Wi-Fi network. From start to finish, setup took around 5 minutes.

Map creation just requires sending the robot out to clean. After tidying up a few loose cords and possible obstacles, we opened the Eufy Clean App and instructed our X8 to get to work. The X8 made its way through all the rooms in our test home, vacuuming each in neat rows.

The Eufy RoboVac X8 has done everything we’ve asked of it and done it well. The mapping and navigation is on par with the best robot vacuums available, and over the long haul, we have yet to uncover any major issues to speak of.

When testing any robot vacuum, we often delete all of its maps and have it start from scratch. Each time the RoboVac X8 produced a clean, accurate map. In total, the X8 can hold 5 unique maps. In our two-story test home we created one map for each floor.

And, the quality of the maps produced by the X8 are impressive – among the most accurate and clean we’ve seen. When it’s first map, or any subsequent maps, are created, the Eufy Clean App divides the map into suggested rooms. How well its interpretation of what is and what is not a room comes down to how complex a floor plan it is looking at.

We found the Eufy RoboVac X8 to be a great all-around performer. For this reason it hovers around, and sometimes atop, our list of best robot vacuums.

One claim to fame of the RoboVac X8 is what Eufy calls Twin Turbine suction. What Eufy has done is placed not one, but two 2000Pa motors under the X8’s lid. The configuration creates more suction than a single-motor setup.

The result was very good across all carpeted and hard flooring surfaces on our standard tests.

When we think of usability, we think of a couple of things. First is maintenance, which was simple. Emptying the bin, and not-so-common tasks, like removing the X8’s brush roll, filter or spinning side brush, are as easy as on any other robot. There’s more on that below.

If we had to give this RoboVac a tagline, it might be most likely to succeed. We simply found it that good at staying out of trouble.

Second, we think of how the robot will generally be used, or controlled. For the X8, getting the most out of the robot is by way of the Eufy Clean App. The App has no shortage of features, including the ability to:

The Eufy X8 can also be paired with Alexa or Google assistants. After doing so, you can instruct the X8 perform a number of function with voice commands. The most common are instructing the robot to start, pause or stop vacuuming. Voice commands also allow specifying a specific room to clean.

The RoboVac X8 has four power modes to choose from. In order of amount of suction from low to high the suction modes are: Pure, Power, Turbo and Max. We used Power or Turbo most often.

The RoboVac X8 also has BoostIQ, which is their branded name for carpet boost. If you’re not familiar with carpet boost, the vacuum increases suction when it transitions from hard flooring to carpeting. This additional suction helps get dirt and debris that is trapped in carpet fibers.

Dirt, debris and the dustbin

One other offshoot of the RoboVac X8’s airflow design is that it packs debris tightly in the dust bin. In the photo below you can see just how the dirt and debris is packed together. The dust bin itself is 600mL in size.

What the RoboVac X8’s suction and compression means in the real world is that, for most, you won’t need to empty the dustbin after every cleaning run. We emptied ours after every 3 or 4 runs and there was still some room to spare.

On the first floor the map created by the Eufy RoboVac X8 was divided into rooms nearly perfectly. In the same home, on the second floor, the map was split up into far more rooms than existed. Thankfully, customizing maps is easy to do.

Getting maps to represent the rooms in your home (and noting where the robot should never go) is all done within the Eufy Clean App. The simple, straightforward functions for map editing make it easy to merge, divide and name rooms. The same goes for creating No-Go Zones and Virtual Boundaries.

Accurate, reliable navigation is at the core of a robot vacuum’s ability to thoroughly clean a home. And, Eufy’s RoboVac X8 has it. Cleaning run after cleaning run, the robot did its job and returned back to charge on its base.

The RoboVac X8 has what Eufy calls iPath Laser Navigation. The system scans the rooms in a home and builds the virtual map in the Eufy Clean App. The round turret on the top of the X8 is where the laser at the heart of the robots LiDAR system can be found.

One of the benefits of an effective LiDAR navigation and mapping robot vacuum is the ability to clean in the dark. We tested the LiDAR equipped robot vacuums in both low lighting and with lighting at all.

When tested in complete darkness, the Eufy RoboVac X8 did great. In fact, it performed as well as it does when in fully lit environments.

The Eufy X8 is smarter than most robots in tough situations

The combination of it’s Laser SLAM navigation, proximity sensors, springy wheels and bevel-top design result in a robot that goes where it needs to without getting itself into trouble. One area where many robot vacuums struggle is with furniture of a height close to its own.

But, although the RoboVac X8 was right at the height of furniture in one room it failed to get stuck. Other robots would pin themselves partially beneath the sofas and chair in this room.

We suspect the LiDAR system combined with the sensitivity of the X8’s bumpers and that bevelled lip we spoke of earlier prevent it from pinning itself in these situations. If we had to give this RoboVac a tagline, it might be most likely to succeed. We simply found it that good at staying out of trouble

Beyond the bumper and laser distance sensor, the RoboVac X8 has 4 drop sensors, a wall sensor and a front sensor.

The Eufy X8 tells you when it needs help

The only thing that stopped the RoboVac X8 was one encounter with a phone charging cord that was left in the middle of a room. That was our fault, not the robot’s, by the way.

When it happened, the robot stop cleaning and the notified us of the problem via the Eufy Clean App. We extricated the cord, and the X8 went back to work. We have also received helpful messages, such as letting us know that the side-sensor needed cleaning. We love that the robot and Eufy Home App are smart enough to warn about potential or actual issues.

We found common Eufy RoboVac X8 maintenance tasks are easy and about the same as any other robot vacuum. We had no problem doing routine maintenance, like cleaning the washable filter or removing hair which had become wrapped on the brush roll, wheels or side brush.

For cutting hair wound on the side spinning brush, brush roll or wheels, Eufy has included a small tool which has a cutting edge on one side and a brush on the other. We find a tool like this on more than half of the robot vacuums we have tested and do like (and use) them.

One thing we often fail to mention is firmware updates. Some brands update the firmware in their robot vacuums often, while others do not.

We were impressed with the regular cadence of firmware updates for the RoboVac X8. I wish we could say we noticed the improvements when watching the X8 clean. But, the fact that we have had such a great experience with the Eufy X8 might just be the best testament to their engineering, firmware, software and algorithms.

After some trial and error with other robot vacuums, we recommend sticking with official Eufy parts.

For reference, at the time of writing this review, a Eufy RoboVac X8 Series Replacement Kit, which includes four filters, two side brushes, a main brush and main brush cover retailed for $60. Individual parts were well priced, too. Two replacement filters were $12 and a replacement main brush is $15.

This was amount the first LiDAR-equipped robot vacuums we have put through long term testing. And, we’re impressed.

The Eufy RoboVac X8 has done everything we’ve asked of it and done it well. The mapping and navigation is on par with the best robot vacuums available, and over the long haul, we have yet to uncover any major issues to speak of.

We recommend the Eufy RoboVac X8 without hesitation.
96.1ExcellentCheck Price