Robot Vacuum and Mop with Self-Emptying Dock
When purchases are made through links on our site we may earn an affiliate commission. As an Amazon Associate we earn from qualifying purchases. The price you pay is the same.
Rating
94.7
Excellent 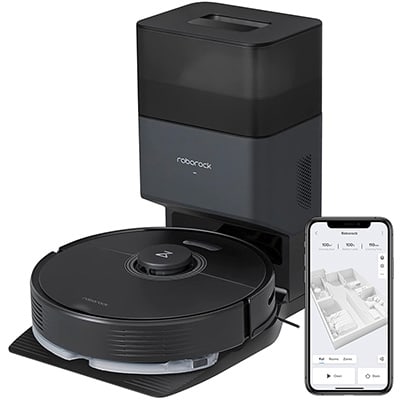 Review the dimensions, color and other physical and visible characteristics of the robot vacuum.

The sensors and navigational aids the robot vacuum uses to move and assess floor surfaces and condition.

Run and recharge time for the robot vacuum cleaner.

The cleaning modes the robot vacuum cleaner is equipped with.

Additonal cleaning characterstics of the robot vacuum including its filter, cyclonic action and if it is rated for use in homes with pets.

If and how the robot vacuum integrates with mobile apps, smart home platforms and other technologies.

The surfaces the vacuum cleaner is capable of cleaning.

The manufacturer warranty and certifications for the vacuum.

When the Roborock Q7+ come out?

What are the dimensions of the Roborock Q7+?

Does the Roborock Q7+ mop?

Yes, the Q7+ is both a robot vacuum and mop.

Is the filter on the Roborock Q7+ a HEPA filter?

No, the Q7+ does not have HEPA filtration.

Yes, the Q7+ can store multiple maps, allowing it to be used on different floors of a home.

How long can the Roborock Q7+ clean before needing to recharge?

According to Roborock, the Q7+ can run for up to 180 minutes before running out of battery power. Do note that maximum run time is calculated with the robot vacuum running in its lowest suction power setting. If the Q7+ runs out of battery power while vacuuming, it will return to its dock, recharge, then resume cleaning where it left off.

It takes the Roborock Q7+ approximately 300 minutes to fully recharge its battery.

Is the Roborock Q7+ discontinued?

No, the Q7+ is still being manufactured by Roborock and is a part of their family of Robot Vacuums.