Roborock Q5+ Review - The Q5 is even better with Auto Empty

The Q-Series makes a strong debut with Q5+. 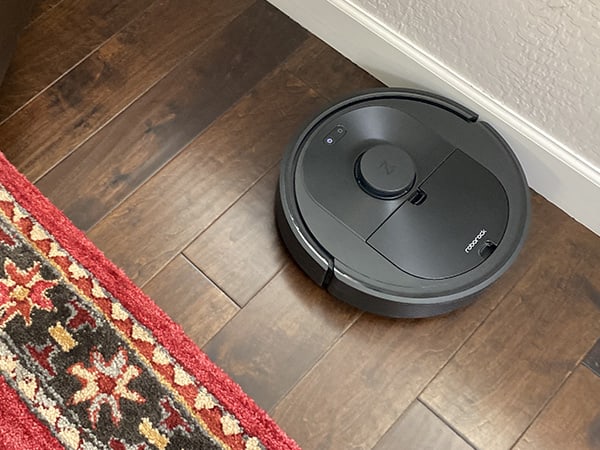 After several weeks of real-world testing, the Roborock Q5+ has proven to be an impressive, reliable all-around self-emptying robot vacuum.

We recommend the Roborock Q5+ for its reliable cleaning performance, auto-empty capability and balance of technology, features and price.

Roborock’s robot vacuums have found themselves at the top of out testing results for years. So, when Roborock offered us a Q5+ to test prior to release we happily accepted. The Q-Series is new for 2022, and the Q5 is the first vacuum-only robot Roborock has released since the S4 Max.

What we really wanted to find out if the Q5+ was a step up from previous models, especially since the Q-Series is being marketed as a mid-range offering. Before getting into our insights on how the Q5+ has performed, here’s a quick look at its pros and cons.

To understand the Q5+ it is helpful to understand where it fits in Roborock’s product line. The state of robot vacuums in 2022 is also important.

While the end-game for robot vacuums is to replace stick and upright vacuums, at current, even the best robot is limited to the role of upkeep. They’re great at maintaining and keeping both carpet and hard flooring clean.

Deep cleaning still requires a more traditional vacuum or mop. With that said, what you can expect out of a robot vacuum continues to evolve. And, the vacuuming performance and cleaning capability robots are capable of today is better than ever.

Without a doubt, the mapping and navigation of the Q5+ is excellent. As impressive is its ability to vacuum, day after day, without getting stuck.

First, if you buy a Roborock Q5+ what you've bought is a Roborock Q5 robot vacuum and an auto-empty base. The Plus in Q5+ simply indicates the item comes with the auto-empty base bundled with the robot vacuum. The non-plus version comes with a very compact charging base. That's the only difference between the two. So, everything we have to say about the Q5+ below, except when talking about the self-emptying base, also applies to the Roborock Q5.

The Roborock Q5+ is a great reflection of how far robot vacuum technology has come and what we can expect in the future. The Q5+ is a step up from Roborock’s entry level offering leveraging many of the features and technologies found in the brand's flagship S-Series. With the Q-Series Roborock aims to bring high-end features and technology to consumers at a mid-range price. The Q5+ is their first robot vacuum in the series and it’s a very successful one.

Beyond the design of the robot’s top piece, The Roborock Q5+ could easily be mistaken for the Roborock S4 Max. Their dimensions are identical and the bottom is only slightly different in appearance. The Q5+ also has a slightly different bumper. And, after closer inspection, there are other minor differences, too.

In addition to performing standardized tests, we also put the Q5+ through extended real-world use. More specifically, we actually use the Roborock Q5+ on a daily basis in a real environment. That means real obstacles, daily and incidental use, mixed flooring surfaces, unexpected challenges, pets and people.

After several weeks of evaluation, we’ve come to be huge fans of the Roborock Q5+. It excels in what’s important in a robot vacuum.

Roborock really has mapping and navigation figured out. The Q5+ is no exception. Leveraging the PreciSense LiDAR System seen in Roborock’s higher-end offerings, the Q5+ accurately mapped various floorpans.

We reset the vacuum to its factor settings often and had it relearn a tricky floorpan and were impressed with the results each time. Once a floor has been mapped, the Roborock App, which is also used to connect the Q5+ to a local wireless network, is the easiest way to modify the map and control the robot. There are two buttons on the robot itself, a Power/Clean button and Dock/Spot Clean button. We only used them during the initial setup.

Before getting into the various options the Q5+ provides for cleaning, let’s talk about its ability to clean on tile and hardwood floors as well as carpeting. The Q5+ has a familiar floating brush design seen in other Roborock models. In the Q5+ it has been moved rearward a bit, likely to better work with the auto-emptying dock.

In our standard tests, the Roborock Q5+ did an excellent job on all surfaces. It was near-perfect on both hardwood floors and tile and outperformed many robots with higher suction on carpeting. For reference, the Q5+ has 2700Pa of suction, that’s 35% more than the S4 Max and 8% more than the non-MaxV S7 model.

While cleaning, the Q5+ detects carpet and increases its suction level automatically. Beyond that automatic adjustment, there are four selectable suction levels: Quiet, Balanced, Turbo and Max. In the App, you can also specify if the area should be cleaned from once, the default setting, to three times.

Once the Q5+ has created a map it is simple to divide it into individual rooms using the Roborock App. Rooms can then be named and No-Go Zones and Virtual Walls can be established. This also enables room cleaning by voice with Alexa, Google Assistant or Siri Shortcuts.

While cleaning, the App also provides real time progress mapping. For our reviewers, the 3D map view was a favorite. In this view a map or floor plan is rendered in 3D. The map can be spun and zoomed-in on, too. The only shortcoming is that you cannot initiate a Room or Zone cleaning run while viewing a map in the 3D mode.

The Roborock App provides simple, straightforward access to the cleaning features, maps and status of the Q5+. It even includes the vacuum’s manual. Just about anything you’d want to do or know about the robot vacuum is accessible via the App including:

And, as far as maintenance goes, the App providesthe status of the Filter, Main Brush, Side Brush, Sensors and Dust bag.

Getting around (without getting stuck)

Without a doubt, the mapping and navigation of the Q5+ is excellent. As impressive is its ability to vacuum, day after day, without getting stuck. We’d love to learn more about the algorithm and routines that Roborock’s engineers use to evaluate how to handle tricky situations.

Whether climbing onto tall carpet from a hard surface, backing out when encountering furniture with an oddly angled base, the Q5+ always came out on top. Roborock’s specifications cite a 2 cm (0.8 in) Obstacle Crossing Ability which we found to be conservative.

After weeks upon weeks of use, our Q5+ still hasn’t gotten stuck to the point where it needed to be rescued.

The Q5+ and auto-emptying dock

We love it, and think that you will love it, too. As we mentioned earlier, from here on out, starting with the Q5, every Roborock robot vacuum will be compatible with, or come with, a self-emptying dock.

The combination charging station and auto-empty dock the Q5+ comes with is new for the Q-Series. It is branded the Auto-Empty Dock Pure. A tunnel runs from its base to a 2.5L Dustbag which Roborock says is good for up-to 7 weeks of dirt and debris.

Once vacuumed up, dirt stays out of the home

Auto-empty docks are great from a convenience standpoint but also from a health standpoint. If you have a robot vacuum without an auto-empty base, you know how much of a hassle it is to empty its dirt bin. Only having to change a Dustbag after several weeks of the Q5+ cleaning is great.

But, beyond that convenience, there’s another benefit. You don’t have to deal with the puff of fine dust that gets into the air each time you empty the bin. When removing the Dustbag it is designed to be sealed by a door when removed, keeping allergens and dust inside.

Q5+ cleaning in the dark

Even when equipped with LiDAR not every robot vacuum can navigate and clean as good in complete darkness as it can during the day. The Q5+, like other Roborock models we’ve tested, performs as well in the dark as it does in well-lit rooms.

Of course, since the Q5+ doesn’t have obstacle recognition, cords and other small items that might present a challenge during the day will also do so in the dark.

The 5200mAh battery provides up to 3 hours of run time for the Q5+. In this class, the Q5+ run time is very good to excellent compared with its peers.

To test the robots behavior when the battery runs low, we forced the vacuum to deplete its battery. Before getting too low, it dutifully returned to the dock to recharge before continuing cleaning.

With a decibel meter, we took several measurements of the noise the Q5+ generated on both hard flooring and carpet. Readings were taken from approximately 3 feet away. Averaging those readings provided the results below.

At the time of writing this review, the S7+ (which also has mapping, but slightly less suction) is selling for $950. And, the broader range of self-emptying robot vacuums which perform this well start around $500 and only go up from there.

The MSRP for the Roborock Q5+, which includes the self-emptying dock, is $699.99. While that isn’t inexpensive, it’s not a lot of money for a high-performing robot vacuum with a self emptying dock.

Factoring in the performance, reliability and features of the Q5+ it is a buy in our book. And, considering recent history, expect periodic discounts from Roborock, especially around major holidays.

With this robot vacuum Roborock has succeeded at combining the best features from their S-Series and offering it at a competitive price point. As we reviewed the Q5+ we became more and more impressed with its reliability and cleaning ability.

We recommend the Roborock Q5+.